Learn to judge how this little Bronco Buddy scored on his ride.

To judge fairly and accurately and to appreciate the efforts of the contestants, judges must watch the brute raw strength of the livestock as well as the maneuvers of the cowboy. 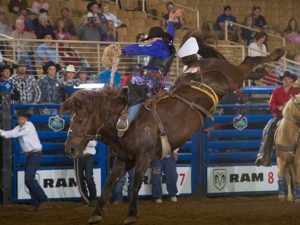 Because the livestock’s performance accounts for half the rider’s score, judges look at darts, dives, twists and rolls. The tougher the ride, the more points the bull or bronc will be scored by the judges.

Losing a Stirrup: If a rider loses a stirrup before the end of his eight-second ride in saddle bronc riding, the judge will make a hand signal to the announcers and timers immediately.

The rider must mark out his horse with the first jump out of the chute. The cowboy must ride for eight seconds.

The rider loses points if his toes are not turned out with his spurs in contact with the horse; if spurring is not continuous throughout the ride; and if he is not balanced and in control (body must be centered, not tilted).

Points are gained or lost according to the rider’s rhythm and timing with the horse’s bucking.

In bull riding, points are scored by the rider maintaining body control and position regardless of what the bull is doing.

Spurring is not required in bull riding, but definitely adds points to the score.

The strength and force of the livestock’s bucking efforts are important. Judges look at how hard the livestock tried to throw off its rider.

Points are given every time the livestock changes directions and spins. Rolling and twisting add points to the score, because livestock that bucks sideways is harder to ride.