Getting ‘Solid’ With Bernie

Breitbart–  Matthews said, “…. socialism. Some people like it. Those of us like me who grew up in the Cold War and saw some aspects of it after visiting places like Vietnam, Cuba, being there, I’ve seen what socialism is. I don’t like it. It’s not only not free. It doesn’t freaking work.” 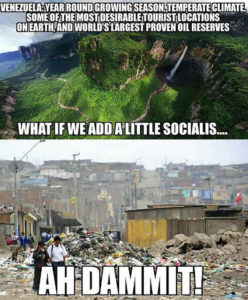 He continued, “…. I have an attitude about them. I remember the Cold War. I have an attitude towards Castro. I believe if Castro and the Reds had won the Cold War, there would have been executions in Central Park. And I would have been one of the ones executed, and certain other people would be there cheering. So, I have a problem with people for the other side. I don’t know what Bernie means by socialism. One week it’s Denmark. We’re going to be like Denmark. I’m like that’s harmless, a capitalist program with a lot of good social programs.”

He concluded, “That’s a great question, what did you think of Castro? We all thought he was great at first. I was cheering like mad for him when he first came in, and then he became a Communist and started shooting every one of his enemies.”