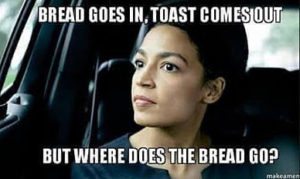 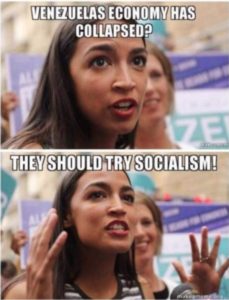 The current top federal income tax rate is 37 percent, so the Ocasio-Cortez plan will nearly double the tax rate for the top bracket.

New Yorkers would not be the only ones suffering under the Ocasio-Cortez plan. California taxpayers would pay a top rate of 83.3 percent (70 percent plus the California rate of 13.30 percent).

In addition to this high income tax rate, taxpayers would remain impacted by other taxes including payroll taxes, taxes on capital gains income and dividends, and the death tax. 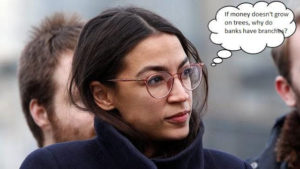 Bernie “The Socialist Claws” Sanders and his Merry Imp, Alexandria, are coming for your stuff. 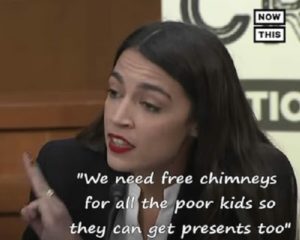 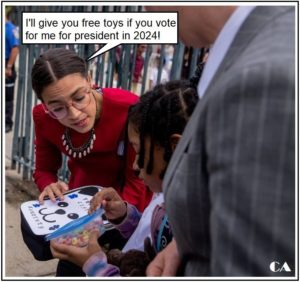 Alexandria Ocasio-Cortez threatened to unleash the powers of the government subpoena on Donald Trump Jr. because he posted a meme critical of part of her socialist dogma – the ‘eat the dogma’ part, methinks.  From The DailyWire, “Ocasio-Cortez Threatens To Retaliate Against Trump Jr. Over Meme, Twitter Explodes With Accusations Of Ethics Violations.” 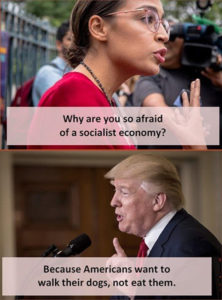 Socialist Alexandria Ocasio-Cortez threatened to use the powers of her elected office to retaliate against Donald Trump Jr. on Friday after the president’s son posted a meme trolling her on his personal Instagram account.

“I have noticed that Junior here has a habit of posting nonsense about me whenever the Mueller investigation heats up,” Ocasio-Cortez tweeted. “Please, keep it coming Jr – it’s definitely a “very, very large brain” idea to troll a member of a body that will have subpoena power in a month.”

OK, then.  Just for fun.  Here’s a few more of our favorite AOC-Alexandria Ocasio-Cortez memes.

Hillary was overheard saying, “With this new face and boobs, and my new lefty slogan, ‘Ain’t No Free Shit Better Than Hillary’s’, those Twenty-something SJW’s don’t stand a chance. Now if I could just get rid of Bill….