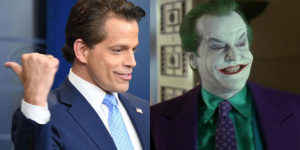 The obnoxious and self-serving Anthony Scaramucci lasted ten whole days as Trump’s Director of Communications.  That does appear to be the record, but apparently T.J. Ducklo’s transgressions actually occurred more that three weeks ago which would have put him only a day or two into Biden’s term.  The White House just couldn’t (or wouldn’t) pull the trigger.  So we’ll just have to let the Refs review the ‘instant replay footage’ and make the call.

Anthony, The Mooch, Scaramucci forgot the First Rule (and the Second, Third, Fourth….) of talking to a reporter.  And what, you ask is the First Rule?  Simply put, it’s repeating 6 times (6x) before beginning any interview, “This is off the record (6x).”

Then you ask, “What’s the Second Rule?”  Easy.  It’s asking, “Are you recording this?”  You notice that the question regarding “recording” comes after repeating six times (6x) that the discussion is “off the record.”  Why in that order?  Simple again.  That keeps the pooch (reporter) from reporting that you asked whether the “interview was being recorded” in such a way that you look guilty because simply asking the question must prove that you have something to hide.  Well, what’s the Third Rule?

You refer back to Rule One and repeat it.  And Rule Four?

You remind the Pooch of Rules One, Two, and Three and tell him that you are recording his understanding of the terms of the interview.  And Rule Five?

Turn the recorder back on.  Are you ready to rumble?

Goodbye, Anthony “The Mooch” Scaramucci. We hardly learned how to spell your name.  Too bad you didn’t take time to learn the rules.  But then again, maybe not so much.  You did appear to be one high maintenance dude.

We might as well open a new category in honor of Anthony “The Mooch” Scaramucci. Mooch-Meme, it will be.