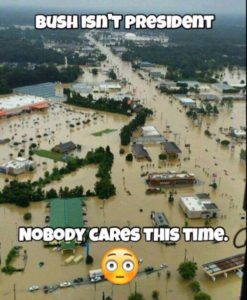 and more battles with Congress….

A theoretically rested president returned to the White House after a 16-day getaway to Martha’s Vineyard, Massachusetts, with his wife, Michelle, daughters Malia and Sasha, and their dogs. He played 10 rounds of golf and went out to dinner eight times.

More than a week after a storm flooded much of central Louisiana, killing 13, more than 86,000 have applied for assistance from the Federal Emergency Management Agency. About 4,000 were still in shelters. 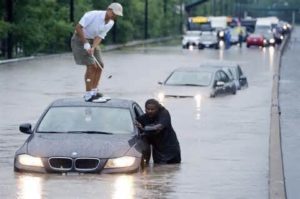 Residents returning to their homes — or those who never left, choosing to ride out the storm — were struggling to survive. Leblanc and about two dozen others in what Cajuns call “Pont Breaux,” about 50 miles west of Baton Rouge, must still be ferried home through rank, alligator-infested floodwaters by tractors, off-road vehicles and boats.

Compare that to this story from the U.S. News and World Report, “The Undoing of George W. Bush–Hurricane Katrina badly damaged the former president’s reputation. And it still hasn’t recovered“.  Hurricane Katrina made landfall on August 29.  Bush cut his vacation short and overflew the area on August 31.  The rest is history, as they say.

On the way back, he had Air Force One fly over part of the devastated area and he glimpsed the wreckage from the plane. White House officials allowed news photographers to take photos of a grim-faced Bush looking out an Air Force One window but the PR gambit backfired. Many Americans saw the photo, which was widely disseminated, as evidence that Bush was too distant from the misery below. In a 2010 interview with NBC, Bush conceded that allowing the photo to be taken was a “huge mistake” because it made him seem “detached and uncaring.”