From Politico we find that “Indiana hasn’t cast its ballots for president yet, but Donald Trump is already losing“.

Republican Party insiders in the state will select 27 delegates to the national convention on Saturday, and Trump is assured to be nearly shut out of 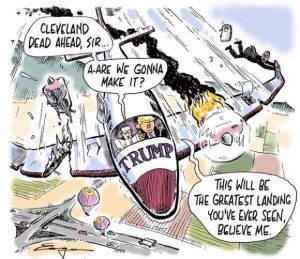 support, according to interviews with a dozen party leaders and officials involved in the delegate selection process. Anti-Trump sentiment runs hot among GOP leadership in Indiana, and it’s driving a virulent rejection of the mogul among likely delegates.

“If Satan had the lead on him and was one delegate away from being nominated as our candidate, and Donald Trump was the alternative, I might vote for Donald Trump,” said Craig Dunn, a local GOP leader who is running to represent Indiana’s 4th Congressional District at the national convention in Cleveland. “I’ve always wanted to own a casino, but he couldn’t give me a casino and have me vote for him.”