“I’m not only going to Wisconsin, I’m gonna go there…” – Hillary Clinton

Hillary Clinton denies rumors that the “Triple C” Campaign Catering Company (a Chelsea Clinton Company, and subsidiary of Clinton, Inc.) has been catering Bernie Sanders’ meals since January 2017.  She further states that there is no truth to the rumor that the “Triple C” only uses lard and beef tallow to prepare it’s recipes.  “It’s just another vast Right Wing conspiracy,” she says. 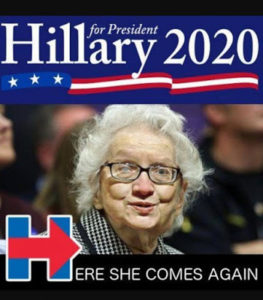 Is Hillary Clinton secretly planning to run in 2020?, shouts the New York Post. 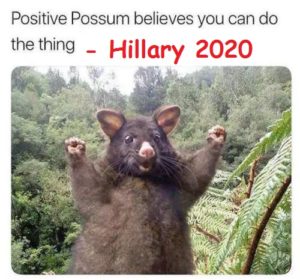 The messages convey a sense of urgency, and are coming with increasing frequency. They are short, focused reactions to the latest “outrage” committed by President Trump.

Some end by asking for money, some urge participation in protests. All read as if they are sent from the official headquarters of the resistance.

Hillary Clinton is up to something.