You’ve still got turkey left that you have to try and find a unique, new way to fix as left-overs.  And you still haven’t put up your Christmas lights.  So get cracking.  Turn off the TV.  Besides tonight’s games are a competition of the mediocre.  The Houston Texans are 4-6.  Big Whoop.  And the Baltimore Ravens are 5-5.  Somebody will win and somebody will lose.  One team will be 5-6 and the other 6-5.  Impressive!!!  Not so much…

Reported by the Gateway Pundit, “ALL BUT SIX Houston Texans Kneel During National Anthem – Over Owner’s “Inmates” Comments“. 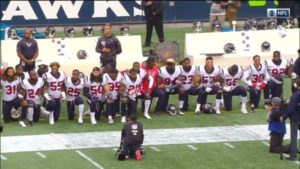 McNair told the representatives, “We can’t have inmates running the prison.”

So those fine ‘inmates’ pitch a hissy-fit and disrespect their Flag, their Fans, their Team and their Country in a passive-aggressive attempt to express some pique at their bosses choice of an analogy. Very mature, boys….

Here’s several examples of how that little phrase is used.

Here’s another example of the inmates being in charge. Not so pretty…

Vote Like Your Freedom Depends On ItNovember 3, 2020
153 days to go.
Scroll back to top
We use cookies to ensure that we give you the best experience on our website. If you continue to use this site we will assume that you are happy with it.Ok