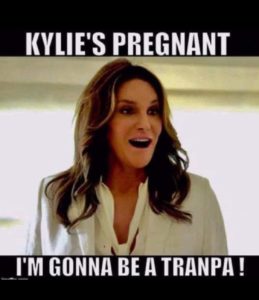 Caitlyn had to learn this from Elle Magazine, of course. “Kylie Jenner Basically Just Confirmed She’s Ready for Another Baby”  Caitlyn was overheard saying, “A Tranpa is always the last to know anything.  Always second fiddle, and never the fiddler.”

It’s been a year since Kylie Jenner surprised the world with the news that she had given birth to a baby girl. Little Stormi Webster just celebrated her first birthday, and apparently it has Jenner feeling a little sentimental about being pregnant.