These states want you to eat more roadkill 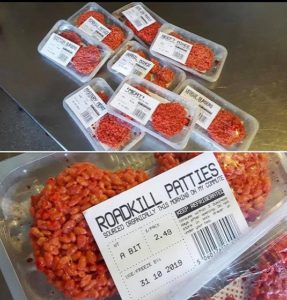 Roadkill is free of the antibiotics, hormones, and growth stimulants found in factory-farmed meat. And many roadkill species–including elk, deer, boar, and certain game birds–are pretty darn tasty, and sell for quite a bit when farm-raised, packaged and offered in stores.

FoxNews reports that, “Mickey Rourke isn’t holding his punches when it comes to his thoughts on President Trump.” In fact, ‘some say’ that Rourke blames his case of Trump Derangement Syndrome for making his face look like Montana roadkill. Mr. Rourke explains.

“That piece of s–t that’s sitting in the White House, that p—y, that lying c–ksucker. That no-good f–king two-faced f–king piece of s–t,” he said in the video. “He said some really nasty things about the two of us. And you know what? It’s personal. There’s gonna be a day where he ain’t president, and we’re gonna bump into each other. And you’re gonna feel me.”