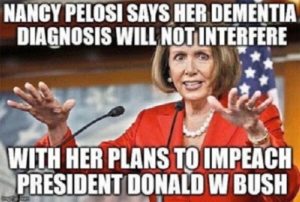 That would be a ‘One Term Baby’, I think. No play on words intended…well, maybe. 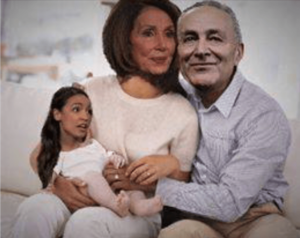 And a few more Chuck and Nancy’s at their very best…. 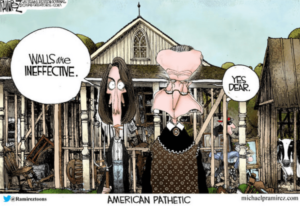 Chucky, Bugsy, and Morticia yuk it up at the Democratic response to Donald Trump’s Border Crisis Oval Office Speech.  Just think.  You were there when a new meme was born. 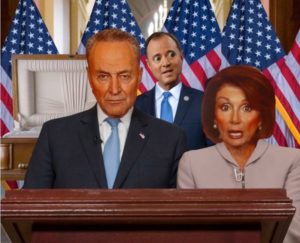 And the Obamas, and even Mad Maxine Waters, but not for you and me? How does that work anyway?

Yep. These are San  Francisco Democrat and Minority Leader, Nancy Pelosi’s, self-same constituents. The one’s that she’s whipping up (heh) to protest Judge Brett Kavanaugh’s nomination to the Supreme Court.  This year, they’re stessing consent….hmmm?  Does that mean that it was a PROBLEM before this year?  Prolly so.  Will it be a problem next year?  Prolly so, ditto.

The message was distilled into a social media campaign and onto signage around Sunday’s 13-block fair, which featured bondage exhibits, people pulling their collared partners on leashes, and lots of bodies clad in leather — or nothing at all.

I don’t know about you, but I tend to think that someone who would consent to being abased in this way, probably is not competent to actually give consent.  Here’s Nancy’s San Francisco rogues gallery.  Now go out and fight Judge Kavanaugh!!!  But first, untie yourself.