What an extraordinary lack of self awareness they have, proving that Democrats should never, ever again be given control of Government. 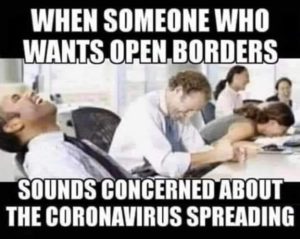 BuzzFeed News – Michael Bloomberg is airing an ad titled “Pandemic” across TV nationwide. Elizabeth Warren put out an early plan for preventing the spread of infectious diseases. Amy Klobuchar has talked about containing the virus as a way of transcending partisan politics. And Joe Biden, Bernie Sanders, Pete Buttigieg, and Tom Steyer are all talking about the virus as they campaign ahead of the South Carolina primary on Friday and in 16 Super Tuesday contests next week.

The common factor: Each candidate has turned the outbreak into a new, potent critique of Trump, hitching their individual campaign messaging to a story that has otherwise begun to pull Americans’ attention away from the presidential election.

Keep up the good work, girls.