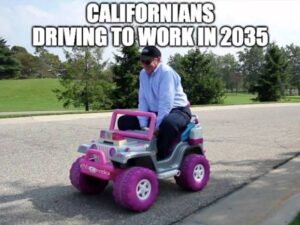 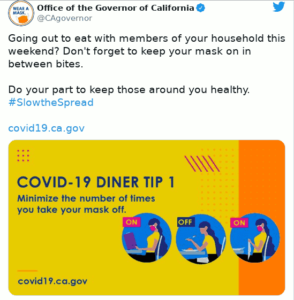 FoxNews–The office of California Gov. Gavin Newsom has told residents in the Golden State that if they go out to eat, they should be wearing a mask “in between bites” to protect themselves from COVID-19.

“Going out to eat with members of your household this weekend?” an Oct. 3 tweet from the governor’s office says. “Don’t forget to keep your mask on in between bites.”

For emphasis, the tweet shows an image of someone at a dining seat wearing a mask, then not wearing a mask while taking a bite, and then putting the mask on again.

Some in Idaho want to stop ‘plague’ of Californians moving in

The Oregonian writes,  “At a candidate forum in late October, he had a terse answer for the question: “If you were king or queen for the day, what one thing would you do to improve Boise?” 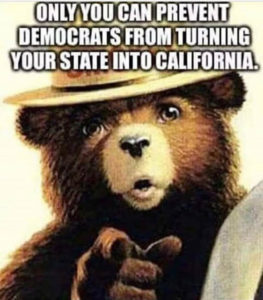 “A $26-billion wall,” he said, laughing, drawing out each word for maximum emphasis. As in build one. Around Idaho.

California bashing is a cyclical sport with a long history in the heart of Idaho’s Treasure Valley. Growth spurts have more than doubled Boise’s population since the 1980 census. Four months before federal counters hit the streets here that year, a Washington Post headline crowed, “To Most Idahoans, A Plague of Locusts Is Californians.”