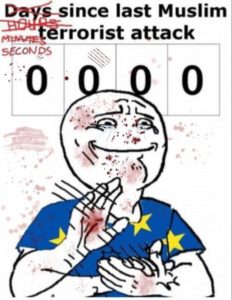 A SOMALI teenager has been arrested on suspicion of murder after a woman was stabbed to death and five people injured in an attack in central London, with police saying “terror cannot be ruled out”.

Here’s a link to a “List of Islamic Terrorist Attacks” in the last 30 days.