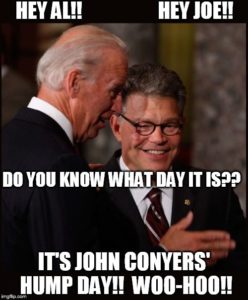 Updated. Michigan Democratic Rep. John Conyers now has his very ‘ownliest’ seat a Charlie Rose’s table. from Buzzfeed, “She Said A Powerful Congressman Harassed Her. Here’s Why You Didn’t Hear Her Story“.

Michigan Rep. John Conyers, a Democrat and the longest-serving member of the House of Representatives, settled a wrongful dismissal complaint in 2015 with a former employee who alleged she was fired because she would not “succumb to [his] sexual advances.”