I Love the smell of gunpowder in the morning. 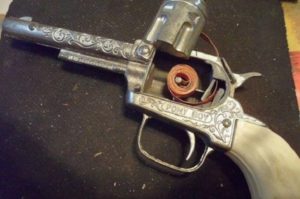 By way of Yahoo News we find that Donald “Trump doubles down on Elizabeth Warren ‘Pocahontas’ attack after Native American woman calls him ‘offensive’“.

Donald Trump repeatedly mocked Sen. Elizabeth Warren, D-Mass., as “Pocahontas” at a press conference in North Dakota on Thursday, even as a Native American woman present at the event interrupted to call his comments “offensive.” 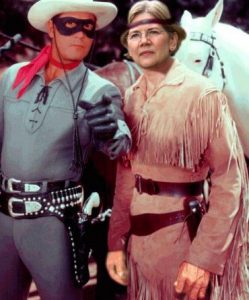 “Is that offensive? You tell me,” Trump asked.

The woman replied that she was offended, and Trump quickly repeated the phrase.

“Oh, oh really — oh, I’m sorry about that,“ Trump said before turning to a reporter who had asked about Warren, immediately using the term again. “Pocahontas. Is that what you said?”

Trump, the presumptive Republican presidential nominee, has previously used the term to refer to Warren as an allusion to a controversy over her past claims of Native American ancestry. Warren listed herself as a minority when she worked as a faculty member at a pair of Ivy League law schools in the late 1980s and early 1990s. Though she reportedly is 1/32 Cherokee, that would not qualify her to be a member of the tribe. The issue made headlines during Warren’s 2012 election campaign and she defended herself by claiming her “family stories” held that they had Native American roots.