It’s pretty bad when #FakeNews Time Magazine has to steal a #ReallyFakeNews cover idea from Mad Magazine.  From SF Gate we learn, “Mad magazine says Time ripped off cover idea“.  But not to worry…. 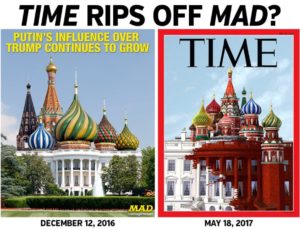 “Honestly, we’re flattered, but we would have appreciated a credit — something like, ‘Idea stolen from MAD, which in 1952 we called a short lived satirical pulp!’ the humor publication said in an online post Thursday that displayed the cover images side by side.

Unfortunately, ‘Acceptance’ has no morphed into ‘Passive-Aggression’. There will be no rest for the “Trumpster”. 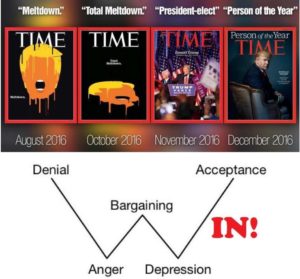