Prolly not a dance you want to do twice. Do ya think? 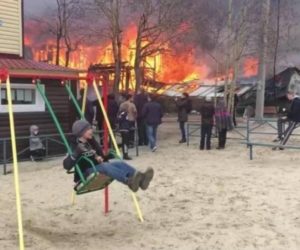 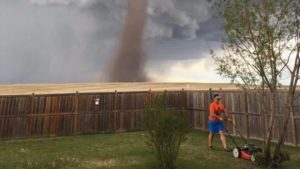 Neither Fire, Nor Tornado…yada, yada, yada, Will Keep Me From My Appointed Duty. 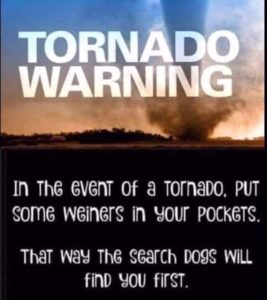 Darwin notes that that fool probably isn’t in Kansas anymore.

Darwin states that this pair of genomes is destined for the record book of ‘genomenus hugeness’.

In honor of this Daily Darwin Recipient, Darwin, his ownself, has launched a new category of craziness, the “What?  Me Worry?  Survival Award”.

From the Times Colonist, “Man who mowed lawn with tornado behind him says he ‘was keeping an eye on it’“. 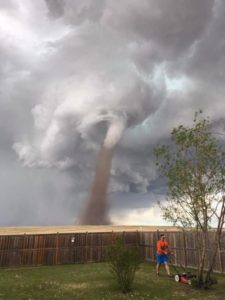 Cecilia Wessels snapped the picture of her husband, Theunis, on Friday evening as the twister passed near their home in Three Hills. She said cutting the grass was on her husband’s to-do list, and as he started the task, she went for a nap.

Wessels said she was woken by her nine-year-old daughter who was upset that there was something like a tornado in the sky, but her father wouldn’t come inside. Theunis Wessels said the tornado was actually much further away than it appears in the photo, and that it was moving away from them.

There have been no reports of injuries from the tornado, although some other photos show downed trees and a barn with its roof ripped off.