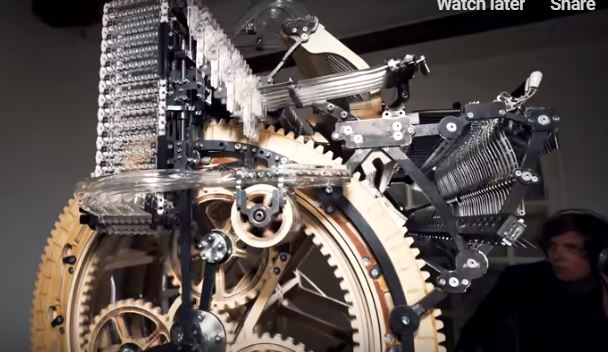 Wintergatan (Swedish pronunciation: [²vɪntɛrˌɡɑːtan], Milky Way) is a Swedish folktronica band from Göteborg. Martin Molin and Marcus Sjöberg were previously part of the former band Detektivbyrån. The band uses a variety of unconventional instruments including the Modulin, a self-invented Theremin, a self-built punch-card music box, a slide projector, a Musical Saw, and a typewriter for use as percussion.

Between December 2014 and March 2016, the band uploaded several YouTube videos featuring Martin Molin documenting the construction of a music box that uses marbles to play instruments. The machine is powered by hand, and works by raising steel marbles through the machine into multiple feeder tubes, where they are then released from height via programmable release gates, falling and striking a musical instrument below. Instruments played by marbles striking them include a vibraphone, bass guitar, cymbal, and emulated kick drum, high hat and snare drum sounds using contact microphones.