“Nutria once lived only in southern South America, but they have been domesticated as fur animals

and transplanted around the world. In many areas, including Canada and more than a dozen U.S. states, fur farm escapees quickly establish large wild populations near their new homes.”

From the Fresno Bee, “They weigh 20 pounds and breed like rabbits – this rodent is invading the Valley“.

The California Department of Fish and Wildlife issued a warning this week about an influx of large, semi-aquatic rodents that have been caught reproducing within 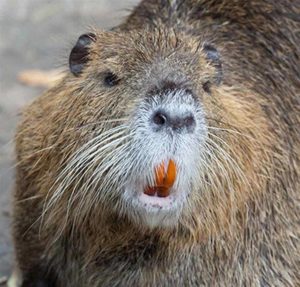 Nutria (or Myocastor coypus) fall somewhere between a beaver and a groundhog and are much larger than a muskrat (up to five times larger, according tot CDFW). They can grow to more than 2 feet long, not counting the 12-inch tail, and up to 20 pounds.

This is a problem because the animal can cause major wildlife destruction – ruining 10 times the vegetation they consume, according to CDFW. They also burrow in dikes, levees and road beds, according to California Fish and Wildlife spokesperson Peter Tira.