Steve Martin recently Tweeted a tribute of Carrie Fisher upon learning of her death.  He tweeted that, as a young man, “she was the most beautiful creature he had ever seen.  Turns out she was also smart and witty, as well.” 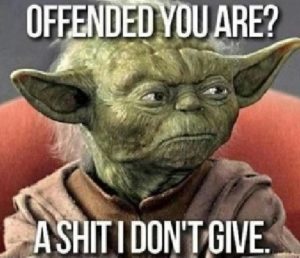 Naturally, the PC feminazis came out of the woodwork, and New York Post magazine people called his tweet awful, and that he shouldn’t have commented on her beauty.  He should take his Tweet down, etc. etc.

Well, I think he should keep it up and double down.  And, as a big, middle finger to the haters, I’ve attached Yoda’s thoughts about the PC People’s complaints on behalf of Steve Martin.