This has been the only thing that has made me laugh since Biden’s Afghanistan fuck-up on August 31. 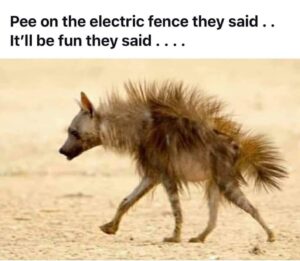 We have a 6 ft. Square tube and welded wire fence in the front yard, and last Saturday, when I heard some thieving Punks might be bringing their BS out to the country, I wanted to make sure they ran into a little resistance before meeting my Kimber 9mm, so I got an electric fence and ran a single wire along the top of the fence.

Actually, I got the biggest cattle charger Tractor Supply had, made for 12.5 miles of fence. I then used an 8 ft. long ground rod, welded a 1/2 masonry bit to a piece of round rod, and sunk the ground rod 7.5 feet into the limestone..The ground rod is the key, with the more you have in the ground, the better the fence works.

On Wednesday my idiot neighbors hired another idiot to trim all their oak trees, yes in June, so now they will all probably die of oak wilt but that’s a whole other story, and one of the limbs came crashing down on top of my fence leaving the main wire down in the yard. So yesterday I’m mowing the yard with my 5 hp Briggs and Stratton push mower. I knew for a fact that I unplugged the charger so I pushed the mower around the wire and reached down to grab it, to throw it out of the way.

Well my sweet little wife had seen that the fence was unplugged and thought one of the dogs had accidentally done it, so she plugged it back in “for me”….How very thoughtful of her.

Now I’m standing there, I’ve got the running lawnmower in my right hand and the 1.21 giga-volt fence wire in the other hand. Keep in mind the charger is about the size of a marine battery and has a picture of an upside down cow on fire on the cover.

The first thing I notice is my pecker trying to climb up the front side of my body. My ears curled 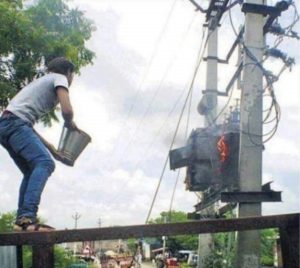 downwards and I could feel the lawnmower ignition firing in the backside of my brain. Every time that Briggs & Stratton rolled over, I could feel the spark in my head. I was literally at one with the engine.

It seems as though the fence charger and damn lawnmower were fighting over who would control my electrical impulses.

Science says you cannot poop, pee, and vomit at the same time. I beg to differ. Not only did I do all three at once, but my bowels emptied 3 different times in less than half of a second. It was a Matrix kind of bowel movement, where time is creeping along and you’re all leaned back and BAM BAM BAM you just shit your pants 3 times. It seemed like there were minutes in between but in reality it was so close together it was like exhaust pulses from a HEMI turning 8 grand.

At this point I’m about 30 minutes (maybe 2 seconds) into holding onto the fence wire. My hand is wrapped around the wire palm down so I can’t let go. I grew up on ranches so I know all about electric fences … but Grandpa always had those piece of shit chargers made by International or whoever that were like 9 volts and just kinda tickled.

This one I could not let go of. The 8 foot long ground rod is now accepting signals from me through the solid limestone rock. At this point I’m thinking I’m going to have to just man up and take it, until the lawnmower runs out of gas.

‘Damn!,’ I think, as I remember I just filled the tank!

Now the lawnmower is starting to run rough. It has settled into a loping run pattern as if it had some kind of big lawnmower race cam in it. Covered in poop, pee, and with my vomit on my chest I think ‘Oh God please die …. Pleeeeaze die’. But nooooo, it settles into the rough lumpy cam idle nicely and remains there, like a big bore roller cam engine waiting for the go command from it’s driver’s right foot.

So here I am in the middle of June , 104 degrees, 80% humidity, standing in my own front yard , begging God to kill me. God did not take me that day …. he left me there covered in my own fluids to writhe in the misery my own stupidity had created.

I honestly don’t know how I got loose from the wire ….

I woke up laying on the ground hours later. The lawnmower was beside me, out of gas. It was later on in the day and I was sunburned.

There were two large dead grass spots where I had been standing, and then another long skinny dead spot where the wire had laid while I was on the ground still holding on to it. I assume I finally had a seizure and in the resulting thrashing had somehow let go of the wire.

Upon waking from my electrically induced sleep I realized a few things:

1 – Three of my teeth seem to have melted.

2 – I now have cramps in the bottoms of my feet and my right butt cheek (not the left, just the right).

3 – Poop, pee, and vomit when all mixed together, do not smell as bad as you might think.

6 – The lawnmower runs like a sumbitch now. Seriously! I think our little session cleared out some 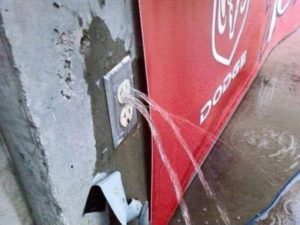 carbon fouling or something, because it was better than new after that.

7 – My nuts are still average size yet they are almost a foot long.

8 – I can turn on the TV in the bedroom by farting while thinking of the number 4 (still don’t understand this???).

I now have a newfound respect for things.

I appreciate the little things more, and now I will always triple check to make sure the fence is unplugged before I mow.

The good news, is that if someone does try to come over the fence, I can clearly visualize what my security system will do to him, and THAT gives me a warm and fuzzy feeling all over, which will also remind me to triple check before I mow.