From the Daily Caller, “Trump Stops To Pick Up Marine’s Hat“. 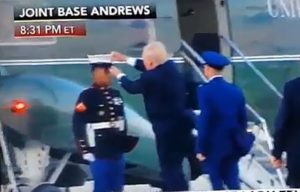 While boarding Marine One at Joint Base Andrews on Saturday night, President Trump stopped twice to pick up a Marine’s dress hat that had been blown away by the wind.

Trump arrived at Joint Base Andrews following the G20 Summit in Hamburg, Germany, where he had his first face-to-face meeting with Russian president Vladimir Putin.

While heading toward the Marine One helicopter, Trump noticed that one Marine had lost his dress hat to the wind.

Trump picked up the hat just in front of the steps to the helicopter and placed it back on the Marine’s head while giving him a couple of affectionate pats on his arm.