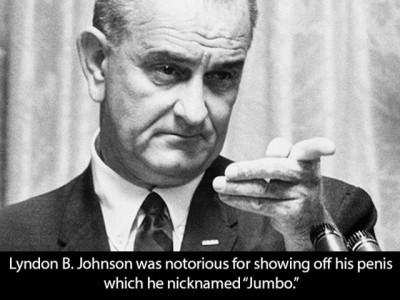 The Daily Caller can write a headline, “Donald Trump Clarifies The Size Of His Junk On National TV“.

Donald Trump made sure to clarify that his hands are not small and neither is his penis on national TV.

During Thursday night’s Republican debate on Fox News, Trump said, “I guarantee you there’s no problem” with the “something else” that “must be 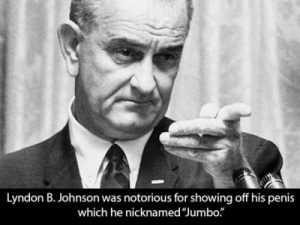 For all you Liberal Democrats aghast at the thought of the junk in the Trumpster’s trunk, remember fondly your own Lyndon “Jumbo” Johnson, 36th President of the United States.

From an excerpt of Robert Caro’s biography, via the New York Review of Books:

He [Johnson] early became fabled for a Rabelaisian earthiness, urinating in the parking lot of the House Office Building as the urge took him; if a colleague came into a Capitol bathroom as he was finishing at the urinal there, he would sometimes swing around still holding his member, which he liked to call “Jumbo,” hooting once, “Have you ever seen anything as big as this?,” and shaking it in almost a brandishing manner as he began discoursing about some pending legislation.

Quote snatched from The Gawker, “LBJ Was Obsessed With His Dick“