There are no words to describe how much Rush Limbaugh, ‘The Doctor of Democracy’, will be missed. 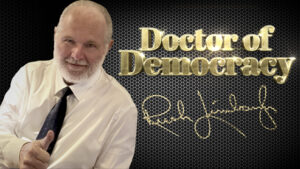