Well, sort of.  In her own inimitable way. Look. It really doesn’t have to make sense. 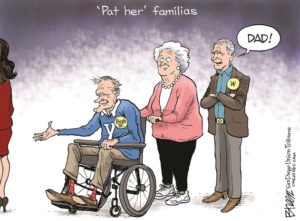 You could call it “A Tale of Two Shakes”.  Presidential handshakes have come a long way in the last 3 weeks since the Inauguration.  And especially far, since that infamous Obama ‘limp-wrist’ thing with Raul Castro.  That one will most certainly reside in the annals of the Most Cringe Worthy Presidential Moments Ever.  I think it’s probably tied for Number 3 on the list along with George HW Bush’s puking on the Japanese Prime Minister Miyazawa Kiichi.  Eewww.