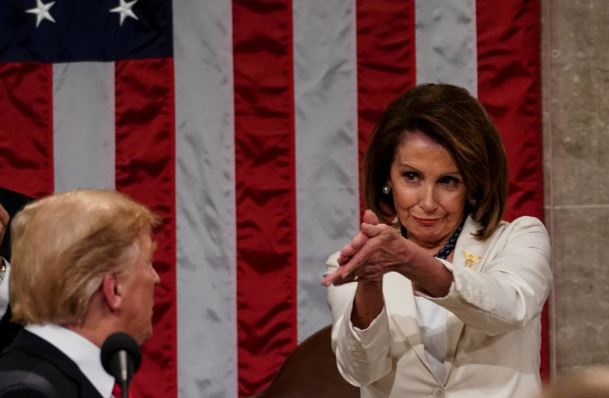 When did Mitt Romney join the Democratic Party caucus?  Watch.  He’s as gloriously despondent as the rest of Pelosi’s crew.

**Moon-clap – ‘Moon-clapping’ is the act of clapping while displaying a facial expression that makes it totally clear to the recipient of said ‘Moon-clap’ that the individual is really simulating the display of buttocks made bare after having lowered the backside of one’s trousers and underpants (or lifted one’s dress or skirt), while bending over, sometimes even exposing the genitals.

Update: R.E.M’s Mike Mills through their music publisher, Universal Music Publishing Group, filed a copyright complaint forcing the clip of the SOTU Address satire scored with the groups “Everybody Hurts” to be taken down from the Twitter platform.  Played just like a true liberal Mike Mills, First Amendment for me, but not thee.  So far the original has stayed up on YouTube, but we’ll see….

The assholes @CarpeDonktum created the meme. #PresidentAsshole retweeted it. Measures have been taken to stop it. @jack you need to get on this.

The re-release of the video with Lee Greenwood’s “God Bless the U.S.A.” is a kickass response.  Smoke on that, Mike.