From History.com, a timely reminder….

On June 17, 1940, the defeated French signed an armistice and quit World War II. Britain now stood alone against the power of Germany’s military forces, which had conquered most of Western Europe in less than two months. But Prime Minister Winston Churchill rallied his stubborn people and outmaneuvered those politicians who wanted to negotiate with Adolf Hitler. 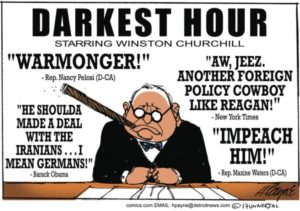