From Quartz we have some of the aswers as to “How did the Toyota pickup become terrorists’ favorite truck?”.

The Islamic State’s plentiful propaganda videos, known mainly for their shocking and gory content, have recently featured something particularly strange and anachronistic: loads of Toyota trucks and SUVs. 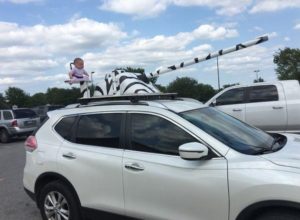 The US government has asked the Japanese auto maker—the second-largest in the world—why the terrorist group has so many of its vehicles. Toyota says it does not know.

The company, which insists it doesn’t sell vehicles to purchasers who might modify them for terrorist activities, is now supporting a US Treasury Department investigation into how these vehicles are ending up in ISIL’s hands. Lukman Failey, the Iraqi ambassador to the US, told ABC News that Iraq believes ISIS has acquired “hundreds” of brand-new Toyota vehicles in recent years—from no clear source. “Regrettably, the Toyota Land Cruiser and Hilux have effectively become almost part of the ISIS brand,” Mark Wallace, a former United Nations ambassador and the current head of an anti-terrorism non-profit, said.

Here’s a question? Were those Obama and Hillary bumper stickers applied to the Toyota “War Chariot” SUV’s before, or after, they were acquired by ISIS? Could the Pickups not only be war machines, but also “little Short Buses” to take voters to Polling Places?

Or maybe it’s the start of a new campaign “strategery” for Madam Secretary, “Heads off for Hillary.” 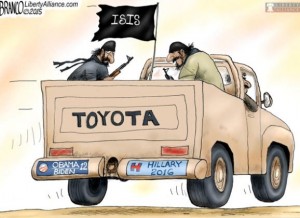 Here’s one plausible way to end warfare as we have come to know it in the Middle East and Africa.

Embargo Toyota.  Cut off all sales of Toyota Pickups and repair parts because “The Toyota Pickup Truck Is the War Chariot of the Third World“.

For three decades, one vehicle has dominated Third World battlefields.

Ubiquitous and incognito, chances are you’re less than a mile from one right 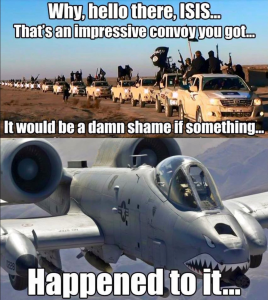 now. You could pass one on virtually any street in any city in the world and you wouldn’t think twice.

The vehicle costs a fraction as much as a modern main battle tank. In fact, you can buy 266 of them for the cost of just one tank. Plus it’s more dependable than a tank—and easier to maintain.

It’s not produced by the United States, Russia, France, China or any of the major arms exporters. It’s made by Japan, an avowedly pacifist country that prohibits the export of arms abroad … particularly to Third World combat zones.

From the deserts of the African Maghreb to the mountains of Afghanistan, warriors from tribesmen to American Special Forces have chosen the Toyota pickup truck as their unarmored personnel carrier of choice.