They don’t want no stinkin’ Green Eggs and Ham… or “refried beans” either. 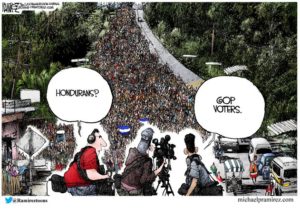 AP reports, “Caravan migrants break Guatemala border fence, rush Mexico.”  ‘Rushing Mexico‘?  Well, I suppose.  However, that choice of a word typically has more of a “sporting flavor” rather than the out and out assault or invasion that it actually is. One can always count on the AP for PC-Politically Correct reporting.  Like Mike Rowe says, “It’s a Dirty Job, that someone has to do.”  And do it,  the AP does.  No sense in using a WORD like attack, charge, invade, assail, storm, or maybe assault when little old rush would do. 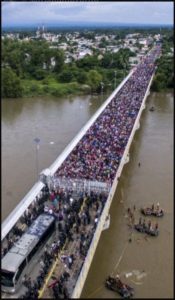 Migrants traveling in a mass caravan burst through a Guatemalan border fence and streamed by the thousands toward Mexican territory on Friday, defying Mexican authorities’ entreaties for an orderly crossing and U.S. President Donald Trump’s threats of retaliation.

On the Mexican side of a border bridge, they were met by a phalanx of police with riot shields. About 50 managed to push their way through before officers unleashed pepper spray and the rest retreated.

The gates were closed again, and police used a loudspeaker to address the masses, saying, “We need you to stop the aggression.”