Pope Francis Calls for ‘No More Walls’…as he sleeps peacefully behind the walls of Vatican City knowing there’s no homeless camps allowed in Saint Peters Square.

Breitbart–We must “make every effort to break down the walls that separate us and, in acknowledging our profound interconnection, build bridges that foster a culture of encounter,” the pope said. “Today’s migration movements offer an opportunity for us to overcome our fears and let ourselves be enriched by the diversity of each person’s gifts.”

“Then, if we so desire, we can transform borders into privileged places of encounter, where the miracle of an ever wider ‘we’ can come about,” he added. 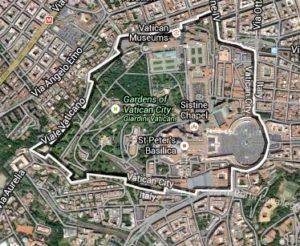 From the Pope’s mouth to your ears, “We don’t need no ‘effing borders”.  Well maybe not in those exact words, but here’s what he did say.  According to the AP, “Pope [says] to young on Poland trip: Believe ‘in a new humanity’“. 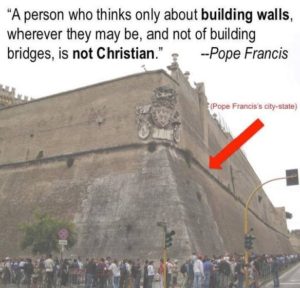 “People may judge you to be dreamers, because you believe in a new humanity, one that rejects hatred between peoples, one that refuses to see borders as barriers and can cherish its own traditions without being self-centered or small-minded,” Francis told his flock, many of them in their late teens, 20s or 30s.

And don’t get me started on guns… 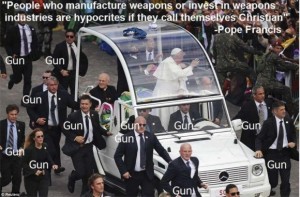 Or is it Pope Sanctimonious I?  Or Perhaps,  just plain Pope Hypocrite. 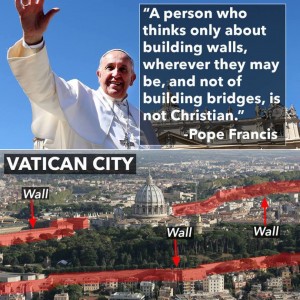