You make a meme, of course.

This led to frustrated Londoners airing their concerns about the spiraling crime in the city, all while Khan remains preoccupied with feuding with Trump.

“This guy spends his week getting a balloon of Donald Trump in a nappy put in the air in central London instead of helping us with severe issues. I just think he’s so worried about himself, his reputation and PR rather than portraying the country, the city in the best way can be and making it safe for the citizens,” London business leader Mark Wright, who won the UK’s version of The Apprentice, told Fox News.

You don’t necessarily have to be Haiti or Somalia to earn the title of a “Shithole country”.  If being able to protect one’s citizens from crime, or in the least, bringing the perpetrators to justice, are criteria of “Shitholery”, then England, and, most especially, Sadiq Khan’s Londonistan, are fast descending into the abyss of the shithole country.

The Daily Mail reports, “Fewer than one in 20 street robberies and burglaries are being solved by police…”

The figures also reveal that only nine per cent of suspects in all crimes are caught and punished – a reduction of more than 50 per cent in the past five years.The worrying statistics will add to concerns about the surge of violent crime in the UK, particularly in London.Scores of violent attacks and muggings have been reported in the capital, with many incidents involving mopeds and knives.

The Revolution will begin in earnest when London Mayor Sadiq Khan decrees that “Sporks” are the only approved utensils for Londoners to enjoy their Roast Beef and Yorkshire Pudding dinner.  Who will step forward as the English Charlton Heston and tell Mayor Khan that, “You’ll have to pry my knife and fork from my cold, dead hands…” 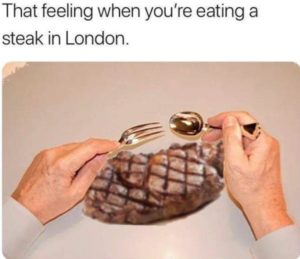