The Mamas & the Papas – “California Dreamin'”

The Momas and the Papas – “California Dreamin'”

3. a thin hollow tube of paper or plastic for sucking drink from a glass or bottle.  Heh.

It’s called the CCSC License (California Concealed Straw Carry), and you can bet your sippy-cup it will be tough bitch to get.

Normally it’s a crime to carry either a ‘full or an empty’ straw in public in California. It doesn’t matter whether you are carrying a concealed straw or one that is openly carried or displayed in a beverage.

Unless you have a CCSC (California Concealed Straw Carry) license, publicly carrying a straw in California is against the law… period.

But you may be issued a permit to carry “a straw, flexible or fixed, or other flexible sipping impliment capable of being concealed upon the person” if:

All that’s left is to pick the carcass clean. California’s liberal Democratic leaders seem determined to destroy the once Golden State of California and the Dream of many Americans.  Broke, mismanaged, in economic decline, over taxed and stifled

by out of control, crazy social policies, the state has sunk so low that it has turned to selling drugs to try and make ends meet.

So how is California trying to fix the problems?  They are threatening employers with jail for following Federal Laws!  Here’s the Gateway Pundit’s headline, “CRAZED California AG Threatens CHARGES Against Employers Aiding ICE Raids On Illegal Aliens“.  What are California’s Leaders saying?  You help ICE, and we’re arresting you.  Illegals?  Not so much.

How bad is it?  Let’s take a 10 minute bike ride through Orange County, home of “The Real Housewives of Orange County“, and see what a ‘Shithole’ the Democrats have wrought. 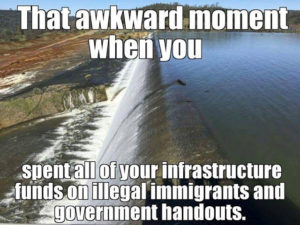