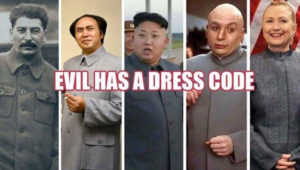 The resemblance is uncanny. The only difference is body count.  According to The Independent, “Mao’s Great Leap Forward ‘killed 45 million in four years’“.  How many bodies could Hillary rack up if given four years?

Mao Zedong, founder of the People’s Republic of China, qualifies as the greatest mass murderer in world history, an expert who had unprecedented 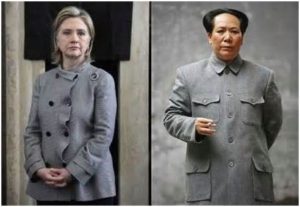 Speaking at The Independent Woodstock Literary Festival, Frank Dikötter, a Hong Kong-based historian, said he found that during the time that Mao was enforcing the Great Leap Forward in 1958, in an effort to catch up with the economy of the Western world, he was responsible for overseeing “one of the worst catastrophes the world has ever known”.

Mr Dikötter, who has been studying Chinese rural history from 1958 to 1962, when the nation was facing a famine, compared the systematic torture, brutality, starvation and killing of Chinese peasants to the Second World War in its magnitude. At least 45 million people were worked, starved or beaten to death in China over these four years; the worldwide death toll of the Second World War was 55 million.